The Mallorca Meet
A workshop put on by the Stone Foundation which Tracey recently attended. English translation is here.

We have worked with a range of contract wallers in our time as ATA Dry Stone. We are:

Whilst our day-to-day operations are limited mainly to North and West Yorkshire, we have also had the fortune to work in destinations further afield. One glorious, hot September day in 2006 we lead a training day for six people in the picturesque setting of the Cevennes Mountains in the South of France. 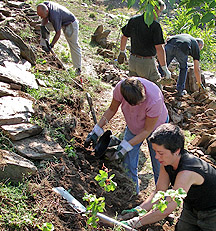 The wall was fully retaining, as it terraces the hillsides for agriculture - like all its counterparts in the region. The stone there is schist from the metamorphic bedrock; layered, flaky and unworkable but quick to build.

Our students seemed nonplussed by the apparent enormity of the task in hand when we asked them to rebuild six metres of distressed ancient terracing, and set to the task of stripping out the wall with enthusiasm. A tea break was then called as the instructors set up frames and a line to build along. Then the real work began.

To see the speed of the trainees increase as they grew in confidence and grasped the principles was a delight. Unlike their tutors they were not alarmed by the presence of small grey scorpions sheltering timidly amongst the stone!

At the end of the day the sun set over the mountains. Flat copes were put in place, and the site cleared to prepare for photocalls. The general atmosphere of pride and celebration was palpable.

This will remain, for us all, one of those special and most memorable days in a life - as will the first taste of a cold beer at the end of it.